Ministry of Foreign Affairs of the Czech Republic;

On 15 May 2016 Sri Lanka was hit by a severe tropical storm Roanu that caused widespread flooding and landslides in 22 districts out 25 districts in the country, destroying homes and submerging entire villages and urban neighbourhoods. More than 300,000 people have been affected according to Sri Lanka Disaster Management Centre. These were reportedly the worst floods in 25 years. Colombo District was the worst affected district in the country with 190,349 people affected by the floods. This is mostly as a result of large numbers of people living on reclaimed, marsh land that is highly susceptible to flooding.

One of the most affected Divisional Secretariat (DS) divisions in Colombo District was Kolonnawa. The main reasons for these heavy damages were that this area being a low lying area located adjacent to Kelani River and flood water remained without receding for over one week. There are 46 Grama Diladhari (GN) Divisions in Kolonnawa DS Division, out of which 39 had the worst experience of the floods and damages to infrastructure, properties and people’s livelihoods. It was reported that about 18,756 families or 94,151 individuals were affected.

Sevanatha, PIN local implementing partner, has carried out detail needs assessment of 300 families affected by flooding in two GN divisions – Sedawatta and Weeramal Mawatha as well as supported Housing Authority to carry out house damage assessment in Kolonnawa DS Division. Some of the priority needs identified by these families are rehabilitation of damaged houses, sanitation facilities, drains, drainage networks and culverts, and decreasing communities` vulnerabilities towards future disasters.

The action of PIN and Sevanatha on the basis of affected people´s needs is of local infrastructure and other assets in the floods-affected neighbourhoods of Kolonnawa DS Division in a disaster resilient manner which lead to rehabilitation of floods-affected communities and building them more resilient towards future disasters.

PIN with Sevenantha has been working on improvement of community infrastructure in 2 GN Divisions (this includes rehabilitation and re-/construction of proper drains and drainage systems, retaining or protection wall using gabion methods in such situations and raise the level of foot paths, culverts), rehabilitation and/or upgrade of sanitation facilities of at least 30 most vulnerable households (such as female headed households, people with disabilities and elderly, low income families with large number of children)and related promotion of these improved sanitation facilities which have  a septic tank, with  a sealed pit, so water does not go inside the pit during flooding.

Biogas systems transform decomposing organic waste such as animal excrements into biogas, a mixture of methane and carbon dioxide, which is then easily harnessed as a fuel for kitchen gas stoves. Its by-product – bioslurry – is an effective and potent organic fertilizer. Thanks to the biogas systems, families gain reliable sources of clean energy for cooking replacing the consumption of fuel wood. Women are no longer forced to cook in smoke-filled rooms. Thanks to reduced burning of firewood, the utilization of methane from decomposing animal waste and replacement of chemical fertilizers by natural ones, emissions of greenhouse gases as well as deforestation are reduced. For SMEs biogas systems are especially of importance as an effective mean for solid waste disposal.

In 2011, an extensive Feasibility Study to research local conditions, potential and particular mode of development of marked-based biodigester sector in Sri Lanka was conducted with the support of Czech Development Agency and in cooperation with SNV and Practical Action / Janathakshan. Following year, plastic (LDPE – low-density polyethylene) biogas systems were installed in selected households of Batticaloa District an a pilot basis.

Together with the local partner Janathakshan, People in Need currently promotes biogas technology at larger scale in five provinces. The programme is targeting two main consumers – households and hotels. Development of biogas technology provides three main benefits: it contributes to diversifinacion of energy mix, offers solution to a problem of local waste management  and last but not least improves soil fertility and increases production of homegrown fruit and vegetables. Furthermore, it will have a positive impact on local economy by enhancing technical and entrepreneurial competences of local construction sector.

Recovery of the East Coast after Tsunami

Following the tsunami disaster, People in Need’s main target area became Trincomalee District in Eastern Province, which apart from the tsunami bore scars of the protracted civil war. Immediately after the tsunami, People in Need provided food and non-food relief items (NFRIs) to almost 11 thousand people during the first weeks after the catastrophe.

After the most critical phase passed, the primary task was to help the people to cope with the consequences of the catastrophe and to work on improving their living conditions. People in Need built temporary shelters, provided basic equipment to households and contributed to recovery of electrical power distribution as well as cleaning up of waste and debris. PIN also focused on establishing child friendly spaces to prevent and deal with traumas and mental problems of displaced children.

It was very important to help the people affected by the war to return back to their normal lives as soon as possible, to return to work and take care of their lives themselves. People in Need therefore supported people who lost their livelihoods with provision of livelihoods assets, small grants and necessary training.

People in Need as well conducted numerous construction projects such as reconstruction and construction of schools and pre-schools, construction of 150 houses in a relocated village of Naduoothu and 80 family houses in Annal Nagar village, sources of drinking water and latrines, village markets, fishing storage houses etc.

In Eastern Province, People in Need build capacities of Local Authorities (Pradesha Sabhas and Urban/Municipal Councils) and supports and strengthens cooperation between them and community-based organizations, primarily Women Rural Development Societies. Local communities are being educated about the range of services they are entitled to, how to approach Local Authorities and how to actively participate in development of their communities.

People in Need gives support to Local Authorities to be able to actually provide these services as well as to extend their service portfolio in terms of quality and quantity. Local Authorities´ staff learns key planning and management skills. Among the most common topic of such trainings are assessing community needs, designing projects, budget calculations, participative monitoring and evaluation.

To motivate Local Authorities to take more active role in securing services to their citizens, People in Need provides them with a financial grant directed to improvement of selected public services and facilities such as pre-schools, public libraries and road drainages. The implementation of such activities promotes citizens´ participation in planning of community development programs and adopts basic principles of governance such as transparency, responsibility, equality and active participation which is more important for the long-term development than the immediate infrastructure outputs.

Recovery of War-affected Areas in the East

Between 2007-2009, People in Need provided assistance to hundreds of families with owner-driven reparation of partly-damaged houses in Trincomalee District where the armed conflict between the Tamil Tigers (LTTE) and the government restarted even before the recovery from the destructing tsunami had been finished. The families carried out the reconstruction themselves while People in Need provided them with necessary construction materials and finances for skilled workers which contributed to the better sustainability of the project´s outputs.

In several villages affected by the fighting, People in Need assisted in rebuilding water tanks, wells, latrines, roads and community centers. The reconstruction of the marketplace represented a complex, multi-purpose project: the marketplace not only supports the economic development, but it also serves as a place of interaction between different ethnic groups and contributes to reconciliation and stabilization of fragile relations among local communities.

The last phase of war caused displacement of app. 300 hundred thousand people who had to stay in IPD camps. In reaction to this critical situation, People in Need assisted with construction and provision of emergency facilities to the IDP camp in Pulmoddai in Trincomalee District to secure more dignified living conditions for the IDPs.

Ministry of Foreign Affairs of the Czech Republic;Real Gift;PIN Club of Friends;

The armed conflict devastated the large areas in the north of the country and forced over 300 thousand people to flee to IDP camps. Despite the fact that the armed conflict ended in May 2009, large majority of people started returning to their places of origin only in 2010 and some even later. People in Need focused on assisting the war-affected people who lost all their property due to multiple displacements and extended stays in IDP camps.

In Kilinochchi District, People in Need employed local people within the framework of cash- for-work schemes in cleaning the irrigation canals and repairing roads, school buildings, culverts, bridges and public places. The works conducted during the program provided income to more than 5 thousand families and significantly improved their short and medium term food security and contributed to restoring their livelihoods. The extremely vulnerable families were provided with livelihoods inputs (e.g. chicken, cows, goats, water pumps, sewing machines, fruit tree seedlings, sewing machines) or with small grants that enabled them income-generation and return to normal life accompanied by various skills trainings.

Recovery of War-affected Areas in the North

In Vavuniya and Kilinochchi Districts of Northern Province, People in Need assisted with owner-driven reparation of houses damaged during the armed conflict between Tamil Tigers and the military forces of the Government of Sri Lanka.

In January and February 2011, rainfalls caused one-hundred-year flood in parts of Eastern Sri Lanka. A large crisis situation emerged which in regards to destruction of major part of harvest endangered food security. Therefore, People in Need focused on food security and livelihoods together with creation of conditions suitable for the long-term sustainable recovery in the East of Sri Lanka.

Within the framework of two projects, People in Need engaged the inhabitants of the flood-affected regions to the cash-for-work scheme which provided them with the opportunity to gain immediate income. Manual works such as cleaning of drainage canals, recovery of access roads or overall cleanup of public places generate income which serves to cover the most immediate needs of the families as well as the recovery of important community infrastructure which in the long-term horizon will help the people to renew their livelihoods.

Produce and then Promote: Sri Lanka has..

Produce and then Promote: Sri Lanka has.. 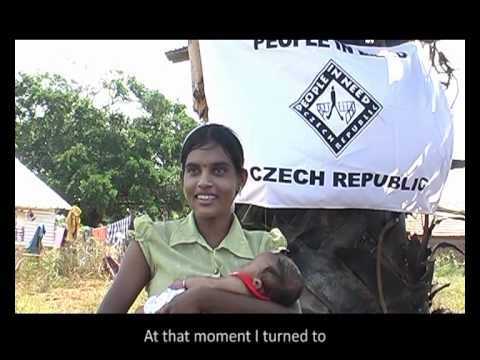